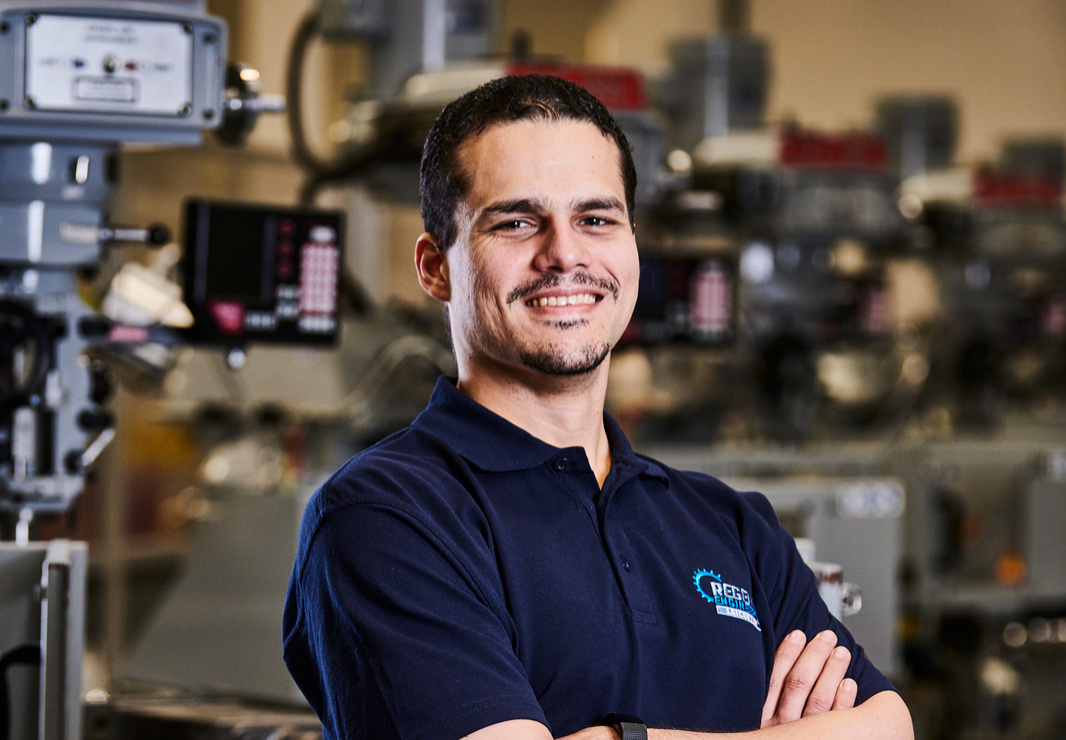 After deciding on a career change in his early thirties, Omar is preparing to return to his employer, Regent Engineers, after completing his first year’s training at the AMTC. Having worked in Quality Assurance in the gaming industry, Omar was looking for a more fulfilling path that still satisfied his interest in problem solving while giving him the opportunity to develop a more practical skillset.

We caught up with him to find out how his apprenticeship experiences compare to his degree studies, why his decision is such a positive investment in his future, and how it feels to be a UK WorldSkills finalist!

Before I started my apprenticeship, I worked in quality assurance (QA) in the gaming industry. It felt a bit of a superficial existence, and I wasn’t feeling particularly valued or like there were real opportunities to advance or change disciplines.

I wanted a more satisfying path with better job security, as well as being able to be a bit more creative, to add real value and do something more useful and practical. I’d been interested in engineering when I was younger, but hadn’t pursued it. I knew an apprenticeship would mean I could learn the skills I needed while being paid, and when Regent gave me the opportunity to become a Design Apprentice, I grabbed it with both hands.

Originally, I was actually looking for a more mechanical focus, maybe something like welding, but actually the design aspects of engineering, things like CAD, really build on my existing experience and qualifications. I’m pretty computer literate, and familiar with working in digital 3D space, so this felt like quite a natural follow on. There’s also a lot of problem solving in engineering, and that was one of things I did enjoy about QA, because reverse engineering an issue is like detective work. I’m still learning about engineering fundamentals just as I would have done if I’d taken a more mechanical route, so I’ve got the best of both worlds!

Did you have an idea of what an apprenticeship would involve before you came to MTC Training?

Not really! Apprenticeships aren’t promoted enough, we need to raise awareness of the pros and cons compared to other education routes. An apprenticeship is a much more useful pathway than going to university and getting a degree – I know this because I’ve done that already!

What are the most memorable projects you’ve worked on so far?

I partnered with another learner from a different employer and we’ve just reached the UK finals of WorldSkills!

In the first round, we worked with Roboguide, setting up a work cell and following instructions to demonstrate that we’d got the engineering mindset and problem solving skills that the judges are looking for and that we’d need to be successful in the rest of the competition.

A month or two later, we undertook a more practical assessment at FANUC. We were given basic training in their robots, and then they gave us our own robot to work with, using the Teach Pendant to programme the robot to complete a particular task. We had to solve a puzzle, and then teach the robot to pick up the pieces, put them in the right place on a board we’d made, and then do the reverse. It was a complex challenge and a lot of us didn’t finish, but my team was the furthest along and showed the skills that the judges were looking for. Now we’re really looking forward to the UK final in November.

What would you say are the benefits and what advice would you offer to those looking to apply to the programme at the MTC?

I love the positive attitude of engineering – you approach problems looking for solutions. There’s a lot of immediate, iterative feedback in an apprenticeship, so you can measure your progress accurately too. I’d say it’s a meritocratic environment – a little competitive but I’d recommend embracing that, because even if you’re dead last, you’re still improving and making progress. It’s really more about competing with yourself rather than other people.

If you’re into taking things apart and putting them back together again, or you like building things at home, then you’ll enjoy this course. My advice would be don’t be a perfectionist. You’ll be working to very tight tolerances and you need to be accurate, but the aim is to create a viable product against the specification. The customer isn’t going to pay for better accuracy than you’ve agreed, so work to your specification. Anything beyond that is a waste.

Mostly, I want to be comfortable and do a good job at Regent – they’ve given me a great opportunity and I want them to reap the benefits of their investment. I’m also enjoying doing my own projects at home outside work too. I can see myself staying here for a long time.

Would you recommend apprenticeships to others?

Certainly! If you’re planning to do any related jobs, I’d recommend it over university 100%. At uni, you learn the same theoretical skills, but gather debt and don’t get any work experience. I found with my degree that once I got into the workplace, a lot of what I’d learned wasn’t actually useful or relevant!

Whilst you don’t have a student loan and you’re paid as an apprentice, if you’re an older learner returning to education like me, the first year can feel like quite an investment in yourself and your future. The pay increases as you progress, so that first year can feel a bit tight, but it will become more comfortable as you enter the later years. I’m still better off than if I was accumulating another student loan – you don’t feel the debt when you’re building it up at uni, but it’s definitely there!