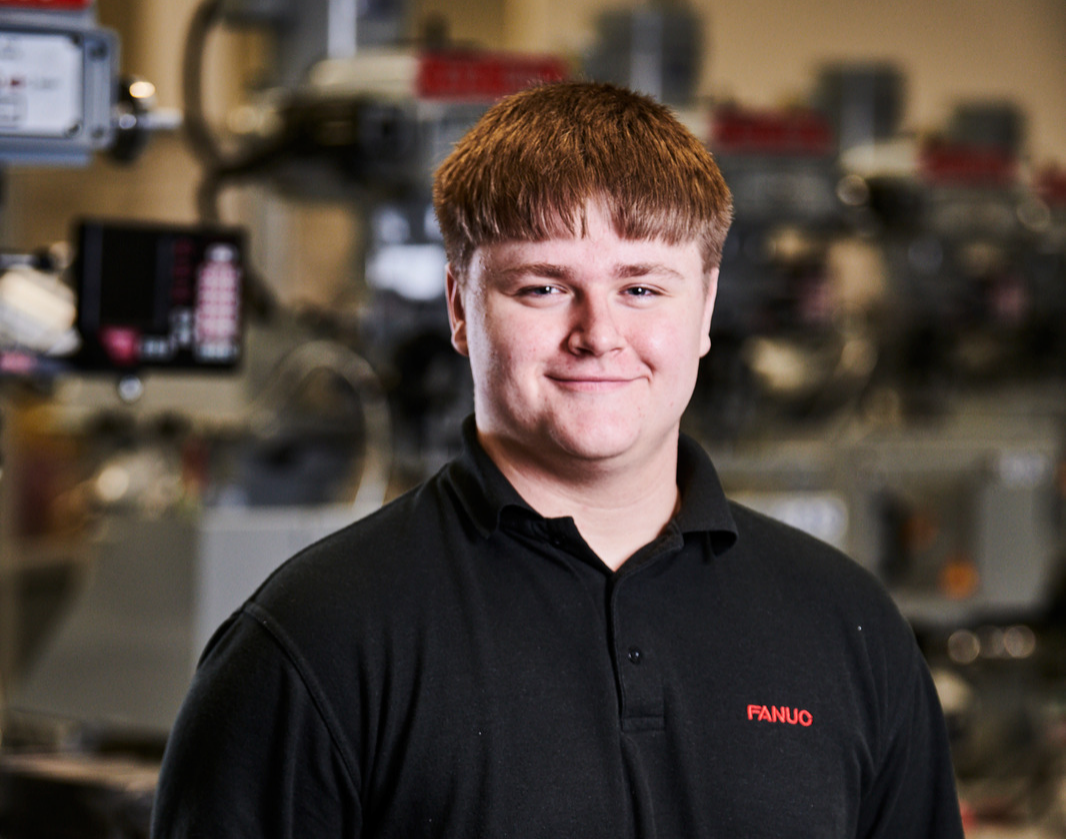 Jack became an apprentice to get ahead of the competition by giving his early career a boost through the combination of skills, qualifications and work experience that he knew an apprenticeship offers. Having studied Engineering at school, he discovered automation and robotics after joining the MTC’s talent pool and is now a UK WorldSkills finalist in Industrial Robotics.

As he approaches the end of his first year of training, we talked to him about how an apprenticeship can help you discover your passion, why you don’t need loads of prior knowledge and experience to join the programme, and how it feels to be the youngest competitor in his WorldSkills final!

My older brother did an apprenticeship so I knew the benefits before I started – you get qualifications and experience, and you get paid. I liked the sound of learning both theory and practical skills, rather than focusing just on theory at college, and I’m gaining skills that are relevant to my job. An apprenticeship also looks good on your CV, and it boosts your early career, because by the time others finish academic courses, I’ll have years of work experience, as well as qualifications. I think it’s hard to get that kind of work experience so early in your career without an apprenticeship.

I knew at school that I wanted to do some type of engineering, but I wasn’t sure specifically which area to focus on. I applied to MTC Training and looked at all the different jobs and employers that were available – I hadn’t even considered automation but as soon as I saw the role at FANUC I knew that’s what I wanted to do.

Were you always interested in a career in engineering?

I did an Engineering GSCE and discovered that it was something I’d like to pursue after I left school. The GCSE was just a taster though, and I didn’t have loads of experience outside school. You can do an apprenticeship without having loads of knowledge and experience already, you just need to be interested in it and keen to learn.

Did you have an idea of what an apprenticeship would involve before you came to AMTC?

Yes, we were told about apprenticeships at school and of course I knew about my brother’s experiences. I knew how it worked – that I’d do training and gain qualifications alongside working.
I think the MTC’s way of doing it makes a lot more sense though. We spend our first year full-time in the training centre and then go out into industry, coming back to the MTC on block release. I’m coming to the end of my first year now, and when I go back to work I’ll have a lot more understanding, knowledge and confidence than if I’d gone straight into work and just did one day a week at in the training centre like a lot of other apprenticeships. That’ll help me a lot – I think it’s great to learn so much in that first year.

What are the most memorable projects you’ve worked on so far?

WorldSkills is definitely biggest thing that I’ve done. None of the apprentices in my group wanted to compete but I didn’t want to miss the opportunity, so I talked to the other groups, formed a team with someone I’d never met, and now we’re finalists! I’m really proud to be the youngest competitor there too. I’d love to win and to have the chance to represent the UK in the world competition, and maybe to help teach and mentor other young competitors to succeed in the future.

How has the apprenticeship programme been beneficial to you and your career?

I’m only in my first year, but I’ve already learnt a lot! It’s also put me in a good position, in good company and on a good apprenticeship – it means I’ve got a secure job at the same time as learning all this stuff! Hopefully at the end of my apprenticeship I’ll be offered a job with FANUC, I think it’s pretty much confirmed if I work hard and do well, whereas my friends at college will reach the end of their courses and then have to start finding a job from scratch.
I’ve also had the opportunity to take part in WorldSkills – I doubt I’d have even heard about it without my apprenticeship!

What advice would you offer to those looking to apply to the programme at the MTC?

My advice would be to be confident in the interviews. You don’t have to know everything already, there were a lot of people going to interviews that knew a lots more than me! Just show them that you’re willing to learn and that you’re applying for a reason – be passionate and show that you’re going to be committed to your learning. That’s what they’re looking for.

What do you enjoy most about your work?

There’s a lot of work in an apprenticeship, but you meet new people and learn new things, and the first year has actually been fun! I’m learning so much and it’s enjoyable. I also really enjoy working alongside the other 11 apprentices in my group.

I’d like to complete my apprenticeship of course, and I’m aiming for an overall distinction. I’ve learned so much in the training centre but I’ll be learning even more once I’m back at work. I’m keen to progress – I’m not certain where I’ll specialise yet, automation and robotics is really interesting and I enjoy it, so I’ll be following that path but there are still a lot of options with the field! When I return to FANUC, I’ll be spending time with different teams and departments to help me discover my particular passion within the business. I’m really looking forward to finding what I like most and what I’m best at.

Would you recommend apprenticeships to others?

Yes definitely! In fact I’ve already recommended it to a lot of my friends who are at college now, and they all want to do an apprenticeship after spending a year at college! It’s a more mature environment at the MTC, you’re working as you learn, and you have a job. It’s not just about the pay, but you are getting paid a good wage to do what you’d be doing at college and more, with the bonus of being in the world of work. A lot of employers also offer further qualifications, like HNCs, so if you’re thinking ‘I wish I’d gone to uni’, doing an apprenticeship doesn’t stop you from doing that.